And:
My hobby horse

The Art Renewal Center (ARC) has accepted me as ARC Associate Living Master™!
This message appeared on the ARC Salon Update: 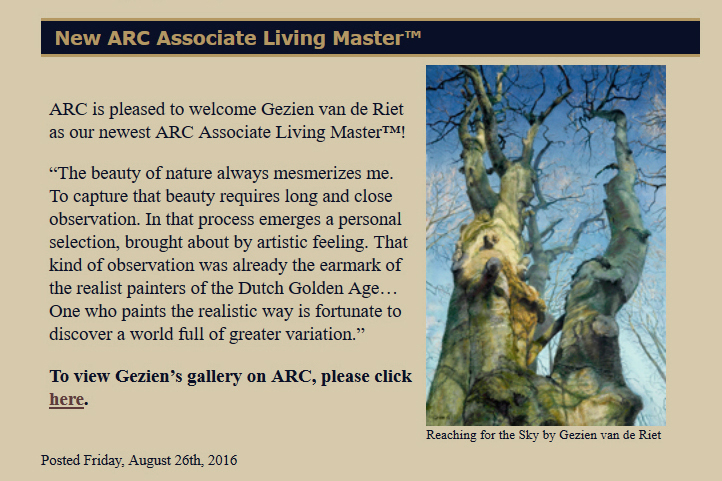 Last year I was finalist in an Art Renewal Center competition (see blog August 2015). After that I was invited to apply to the ARC. If you are approved by four different juries you get your own gallery on the ARC website. Mine is:
http://www.artrenewal.org/pages/artist.php?artistid=7562

The ARC’s recognition means a lot to me. It is a great honor to be part of this online museum. It shows old masters and present-day top artists like Jeremy Lipking, Jacob Collins, Max Ginsberg, and (active in the Netherlands)  Joke Frima and Urban Larsson.

Classical tradition
The ARC is one of the largest online museums that is a standard-bearer of the classical tradition. It encompasses thousands of pictures of art-works. There is a section of ‘living artists’, and an enormous section of ‘dead masters’. In this case I won’t mind ‘moving on’ when the time is there...
The ARC was founded in 2000 by Fred Ross, and also has a physical museum focussing mainly on 19th century art. Ross is a great admirer of the French Salon artists who were later largely forgotten, like Alma Tadema, who has an exhibition now in the Fries Museum .
Its aim is the renewal of the classical tradition. For that a broad range of activities has been developed: competitions, publications of books, articles and instruction materials, exhibitions, historical research, news letters and the building of a network.

Education
Much value is set on education. The ARC features a long list of schools, academies and studios that they have granted approval to. For art student –already from 60 or so countries– there are yearly competitions in which scholarships can be won. 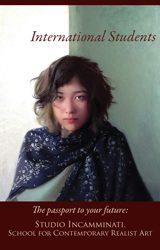 There is a link with the Da Vinci Initiative, that publishes schooling material for classical professional skills, aimed at students and teachers.

During the 20th century a handful of artists remained loyal to classical art. They passed on the technical know how to some dozens of followers. These in turn started their own academy or studio and now train hundreds of students. Right now there is exponential growth.
Because of this strategic choice for education thru books, videos and the internet the classical tradition is secured as far as the transfer of knowledge is concerned. That is for the first time in history.

World wide network
The ARC is projecting itself world wide and has a extensive network. Part of this is TRAC – The Representational Art Conference, a movement for the present-day classical tradition.

There is a co-operation with MEAM – Museu Europeo d’Art Modern in Barcelona (modern here means representational) and several classical academies such as the Florence Academy of Art, that has now opened an establishment in New York.
There are links to art magazines, such as Fine Art Connoisseur and Plein Air Magazine.

I have always cherished a deep wish that a movement would come up to root present-day classical art indissolubly in society, to gain recognition on all terrains where this is lacking right now: in academic art history and philosophy, in (art) education, in the leading museums, media and public policies.

In the Netherlands realism has proven its right to exist. It should be widely present in ‘official’ art history or national museums. It is unbelievable, but all this is blocked by a couple of philosophers, like Lyotard, who maintain that realism and beauty equal kitsch.
The taboo on realism in academic art history has hardly or not been broken. If I'm wrong, tell me.
It is strange that the media have been ignoring realism for more than thirty years – or as good as. The general public have hardly any knowledge of the wonderful works of art that have been produced. They have been kept away from culture full of beauty. It is striking that when a national newspaper does pay attention to a exhibition in a gallery, the number of visitors immediately jumps up, and so do the sales.

Waves
It is a miracle that in Holland so much has been accomplished against so many odds. More and more art galleries sprang up, plus a Realism Art Fair, plus two classical academies and a number of other schools, plus several private museums. Within Europe, realism in the Netherlands has probably progressed the most. But, partly because of the economic crisis, it has become more vulnerable. It is not rooted in leading institutions, so it can just seep away again, with only someone like Henk Helmantel as a footnote in art history.
“Everything comes and goes in waves – that’s history”, you can hear sometimes. Sure, but it’s not the wind that makes these waves. It’s people. That’s why it is so great so many people exert themselves for realism. That’s why it is great that the ARC exists.

Do you want to give my ARC gallery a ‘like’? You can! Please do, at:
http://www.artrenewal.org/pages/artist.php?artistid=7562

Last summer, a tractor pulling a trailer drove up on a camping site in Spain. A farmer from Germany was on a pilgrimage to Santiago de Compostela. In calligraphic letters he had painted on his trailer: “Der Weg ist das Ziel” (“The Road is the Aim”).
Does that motto also apply to art? Please give your reaction!