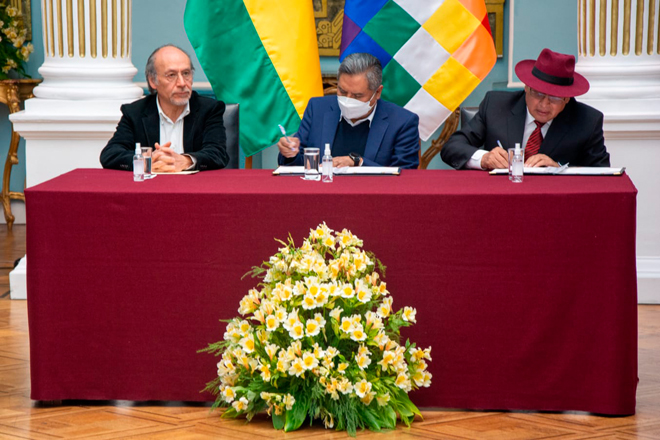 About 500 works of art of mine were transferred to Bolivia. Yes, I can write that in its full meaning: to Bolivia, to the people of that country. Bolivia, which I came to love so much, where I lived and worked for over ten years. 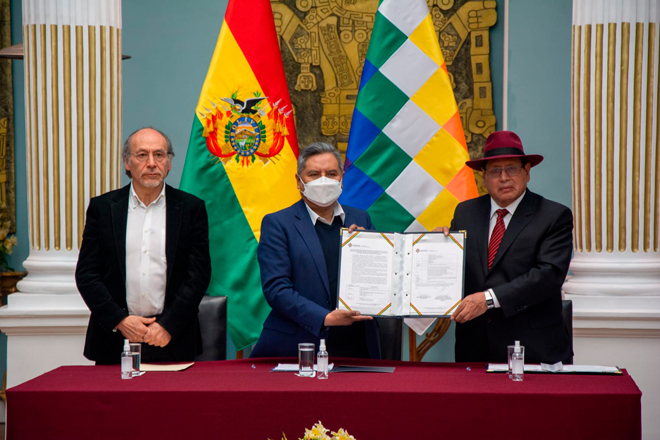 Rogelio Mayta and Luis Oporto show the document of the transfer

The ceremony took place in the Ministry of Foreign Affairs. This ministry transferred my works to the Fundación Cultural del Banco Central de Bolivia. The documents were signed under the colorful flags.
The work will be kept at the highest level. It is the most beautiful place, especially because of the vision of the Fundación Cultural, about which more later. It's a great honour. I'm going to walk next to my shoes. 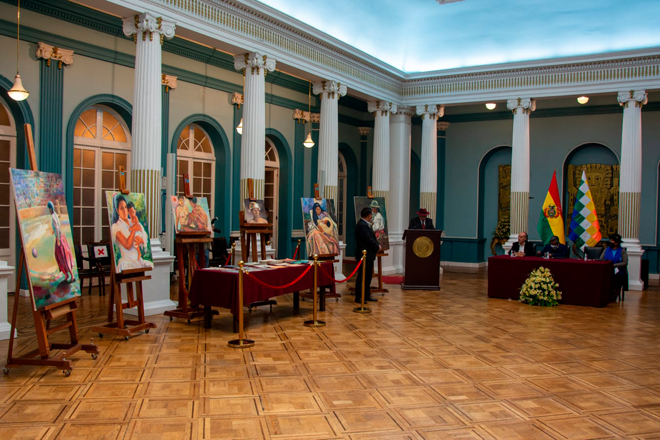 Paintings in the Ministry of Foreign Affairs

In the beautiful salon Tiahuanacu of the ministry, the paintings were mounted on easels. 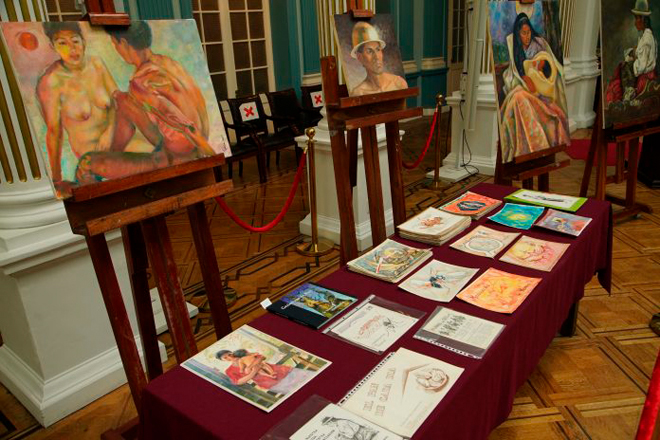 A table with illustrations

On a table lay brochures with my illustrations, and watercolors for slideshows and video. The material provides a picture of the indigenous peoples of Bolivia. 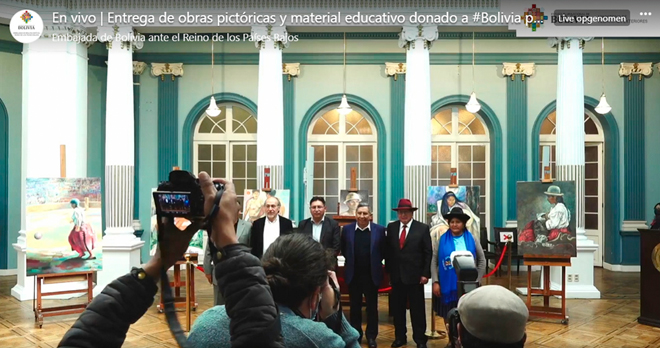 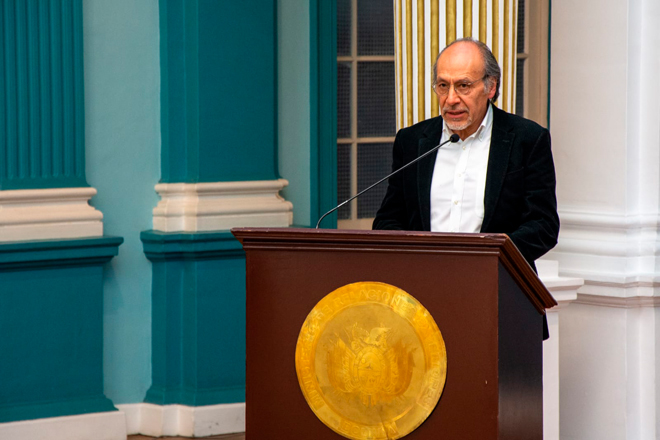 Roberto Calzadilla Sarmiento, Ambassador of Bolivia to the Netherlands

Roberto Calzadilla Sarmiento, Ambassador of Bolivia to the Netherlands, had personally taken care of a safe transport.
Quotes from his speech:
“Mrs Van de Riet has worked in Bolivia for ten years as a sociologist. It is good to recall that in 1981 she met Lucila de Morales, the president of the young Peasant Women’s Union 'Bartolina Sisa'. Gezien then made a drawing for a poster for the meeting where Lucila de Morales spoke. 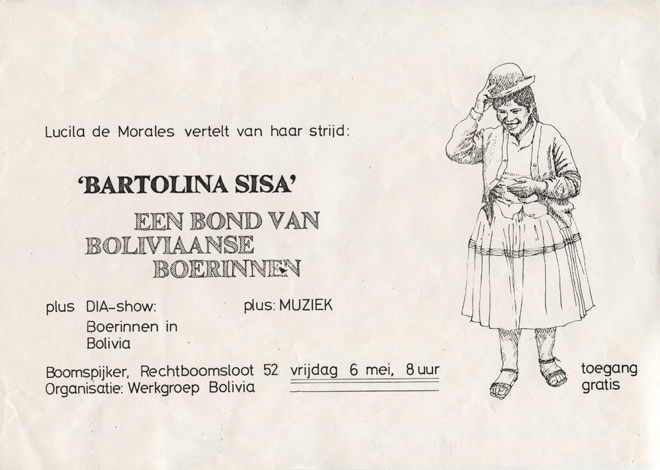 Pamphlet for the meeting with Lucila de Morales, May 6, 1981, Netherlands

After that, Gezien went to Bolivia where she also worked extensively with the Housewives Federation of La Paz. During that time, she enrolled at the La Paz Art Academy to further develop her art.”

“I believe that this is a legacy that Dutch development cooperation has left in Bolivia, this commitment to support the various social organisations.
Mrs. Van de Riet's husband has worked in the restoration of the archives of the Miners' Union of Bolivia, because during the years of the military dictatorship, this union history of the miners was lost.” 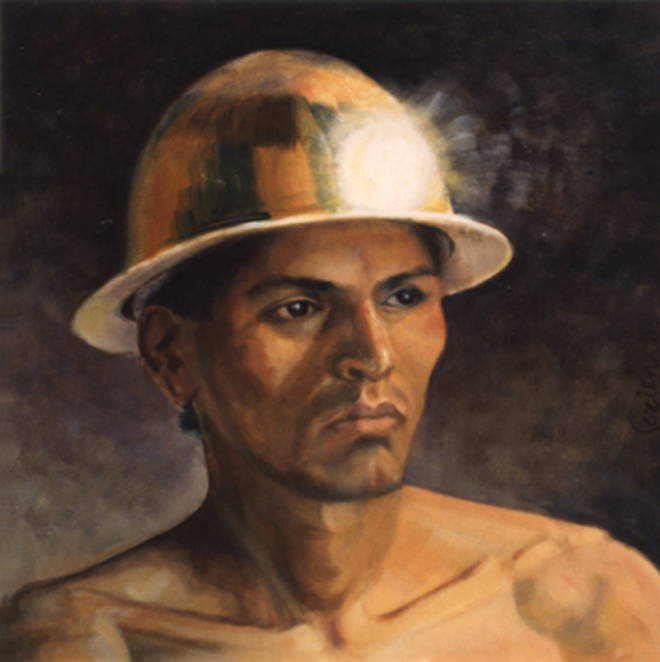 “So this Dutch couple has shown a strong bond with Bolivia. They felt part of our process of change.”

“We are pleased to have contributed to this. That is also an example of the "diplomacy of the peoples".”

Roberto Calzadilla's special approach accelerated the process. He personally carried the work with the diplomatic post. Eduardo Rodríguez Veltze should also be mentioned here. As ambassador at the time, he had already made agreements with the Fundación Cultural in 2019. Due to a change of government and Corona, the process was interrupted. 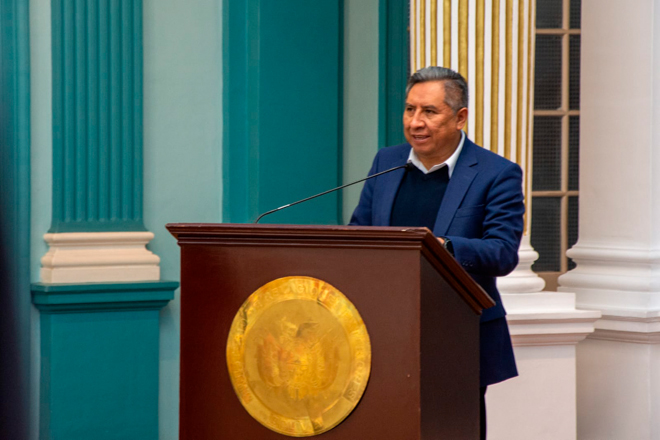 “Like so many people born in other latitudes, Gezien van de Riet fell in love with Bolivia and the Bolivians. Our goal of the social struggle also became her life goal. And for years she has been with us in our pursuit of building our Plurinational State - since the first steps where this was still an embryonic idea.
Well, Gezien has left us her work, or that part of her work that represents the Bolivians, in different activities, at different times. Through her art she shows us ourselves through a European lens. But it was the friendly gaze of someone with a warm feeling, expressed in paintings and watercolors, also through our own art forms, and also with a pedagogical purpose, through a lot of illustrations.”

“Through this art we can, in a sense, give shape to intercultural diplomacy.”

“It only remains for me to thank Gezien from a distance because she accompanied us for several years in the path that our people have traveled, shared joys and sorrows, and was in a sense also a Bolivian, through her art. Thanks a lot!" 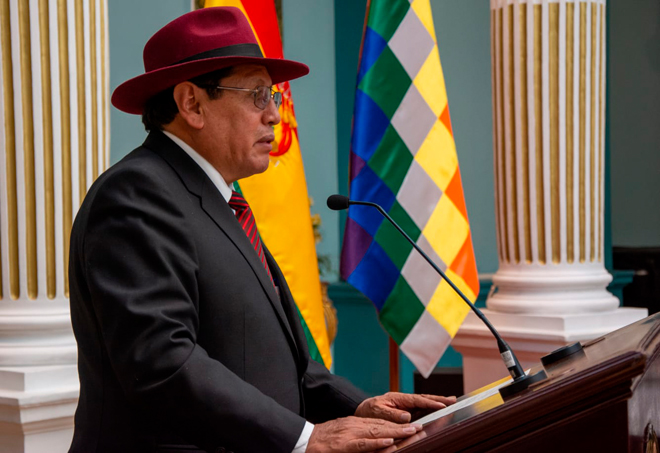 Luis Oporto Ordóñez, President of the Cultural Foundation of the Central Bank of Bolivia

Luis Oporto Ordóñez, President of the Cultural Foundation of the Central Bank of Bolivia,
points to the Constitution (2009), which states that Bolivia has a duty to record, preserve, restore, disseminate and promote the cultural heritage of the Bolivian people. This is the mission of the Cultural Foundation.
Plurinational State of Bolivia means that the own culture of the different indigenous peoples can be preserved. They have the right to self-government within the framework of one state.
The current government is based on the popular organizations.

Logo of the Cultural Foundation of the Central Bank of Bolivia

“The work that we see here, repatriated from the Netherlands (…) comes from the artist called Gezien van de Riet.”

“She has (…) worked together with social movements, such as the Peasant Womens’ Union 'Bartolina Sisa'. She was always there and left a body of work that now also has to be registered.

Mural 'From early in the morning until late at night' in the Hospital Holandes, El Alto, Bolivia, by Gezien van de Riet, Alberto Medina and Filhy Torrelio, 1997

It is a body of work partly consisting of a mural, which is an illustration of the will of the Plurinational State to protect the health of the Bolivians. That mural by Gezien van de Riet is located in the Hospital Holandés (Dutch Hospital near La Paz, in El Alto).” 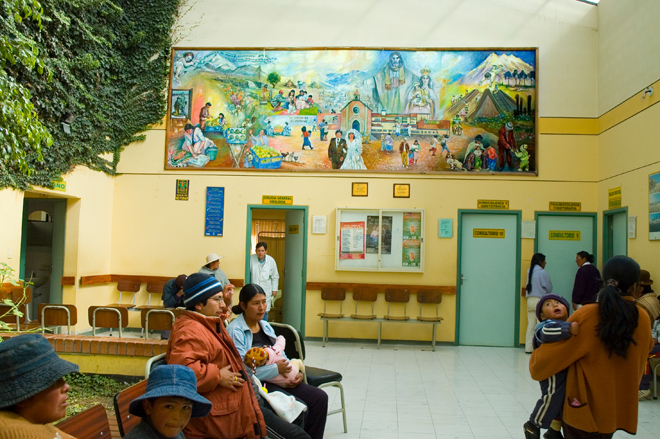 In the waiting room of the Hospital Holandes

Oporto announced that the Museo Nacional de Arte, the National Art Museum, will exhibit my work at the end of this year, “so that the entire Bolivian population can admire it.” This is special: the Fundación Cultural believes that culture should be there for everyone. Traveling exhibitions are also organized for this purpose. The Museo Nacional de Arte is part of the Fundación Cultural.

“Jeroen Strengers was the one who realized the recovery of this historical heritage of the Miners' Union, which had practically disappeared with the dictatorship of García Meza.”

“He is part of that army of archivists that we have registered in the Biographical Dictionary of Archivists of Bolivia, published by the Vice-Presidency of the Plurinational State of Bolivia, first in 2012 and then in 2016. That work records the project of organizing, collating and reconstructing the miners' archive.”

Director of SIDIS, Jeroen Strengers, 2nd from left, presents his book 'La Asamblea Popular' under the auspices of the Federación of Miners. Right Edgar Ramires, president of the Federation of Miners' Unions. 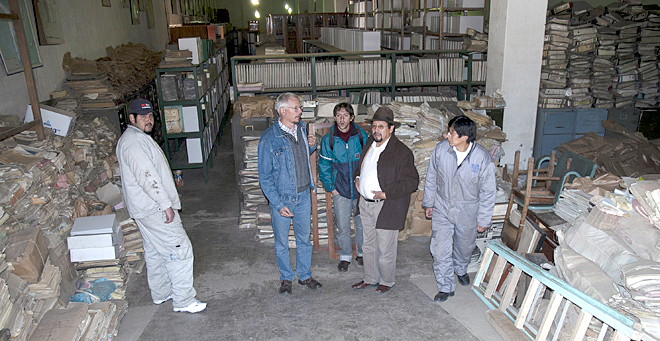 Jeroen Strengers, 2nd from left, with Luis Oporto, 2nd from right, in the Archives of Comibol, 2007

The three speakers had worked hard on it. Their words touched us deeply, precisely because our intentions were so well understood, precisely because we experienced the social commitment of the Fundación Cultural that also drove us. Their appreciation is unforgettable. When we saw the video, we were both moved. 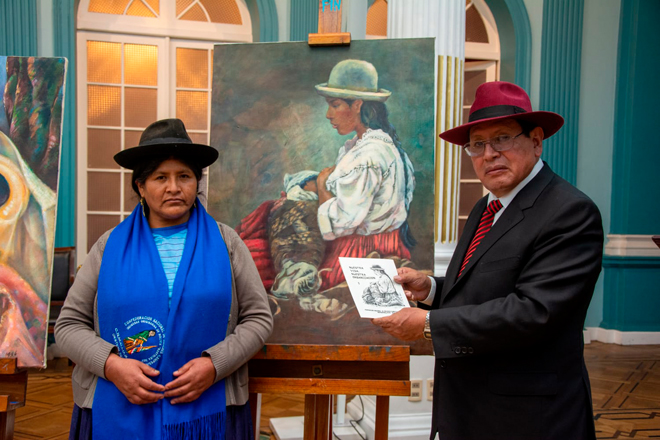 Gregoria Reina Vallejos, the Education Secretary of the National Federation of Indian Peasant Women of Bolivia 'Bartolina Sisa' with Luis Oporto with the brochure and the painting

And a special surprise: the National Confederation of Peasant Women of Bolivia 'Bartolina Sisa' was also represented. I illustrated their first brochures. See story in my blog 16: www.gezienvanderiet.nl/blog-es 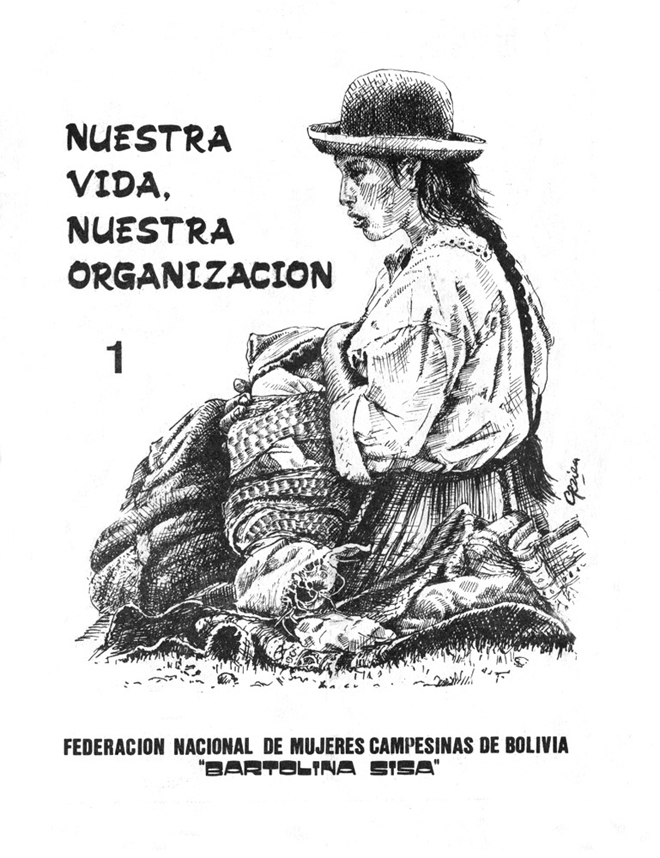 Gregoria Reina Vallejos, the Education Secretary, represented the Confederation, along with other members. Her shawl was decorated with the emblem of the Confederation, Bartolina Sisa, born in 1750. Bartolina was a legendary fighter against Spanish oppression. Roadblocks were already organized by the Indian population back then. 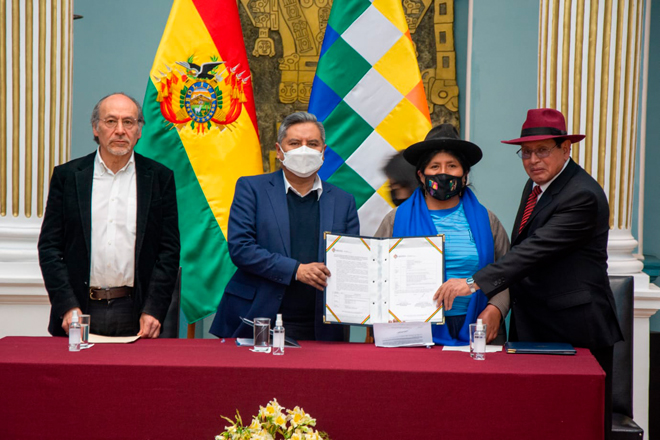 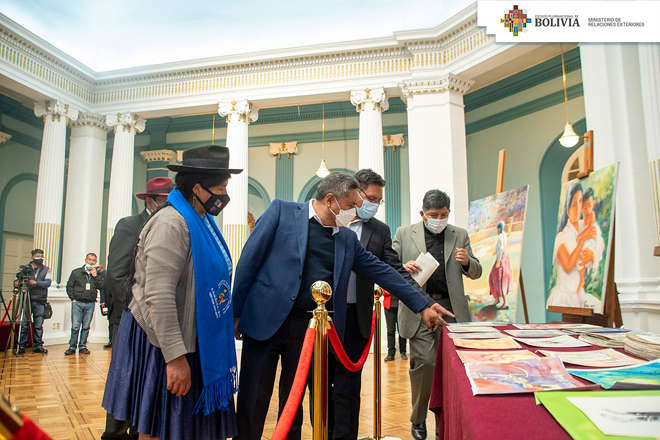 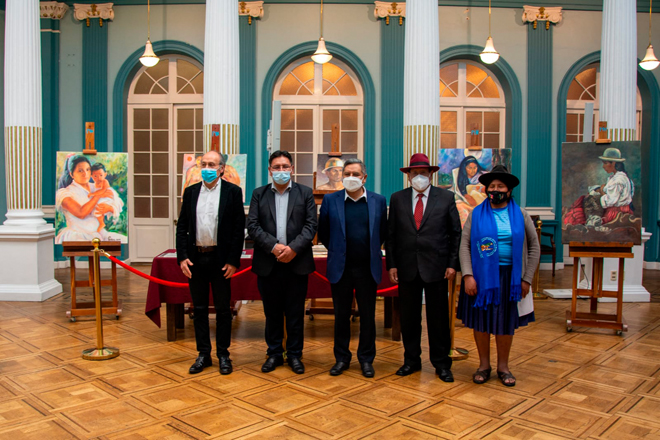 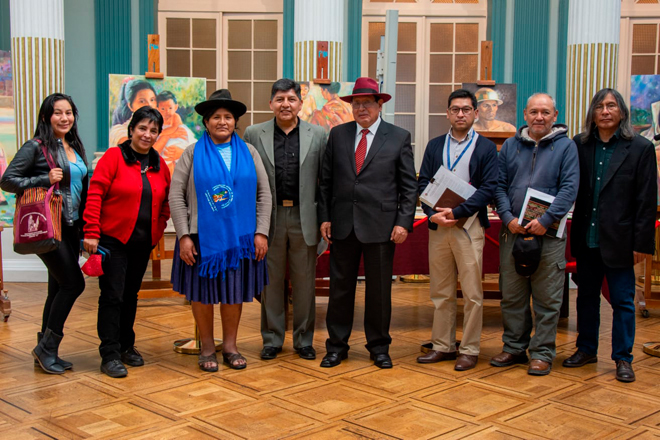 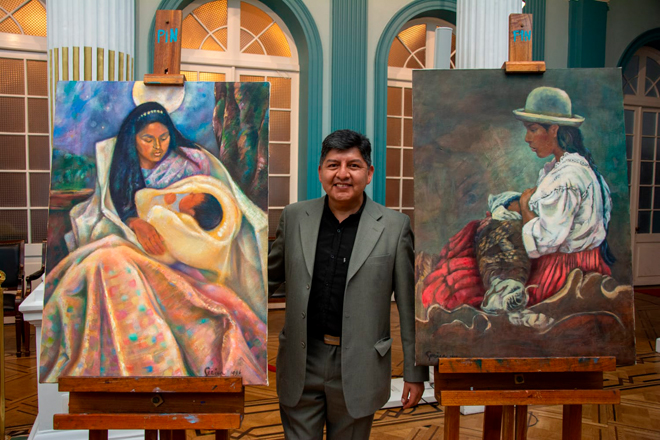 David Aruquipa, Head of Culture Management of the Cultural Foundation of the Central Bank of Bolivia, facilitated the transfer process in a stimulating and effective way. He also took care of the photos of the transfer. I am grateful to him for that.

Illustrations
I tried to turn the illustrations into art in which the Indian population would be the main subject, in which they played the leading role. 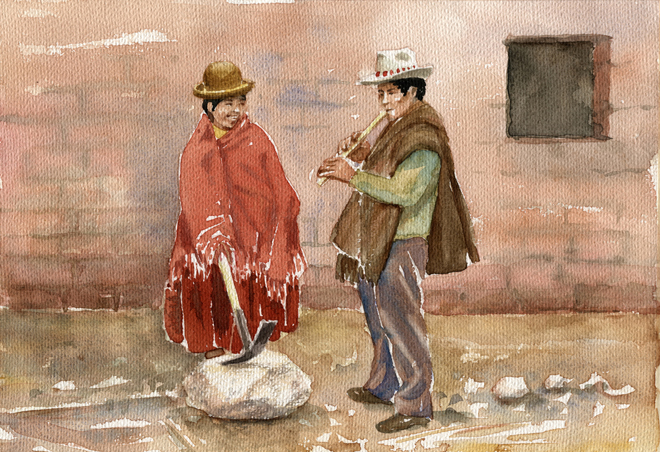 I did my very best and hoped that my illustrations would strengthen their self-image standing up for their rights. I aimed for an aesthetic level that people could enjoy. That way I could make a small contribution.

Art in general was not intended for the indigenous population. They were rarely depicted as real people. However, when people are portrayed in a true and beautiful way, recognition is possible and love and pride can be aroused. This was my motivation, although I still had a lot to learn. 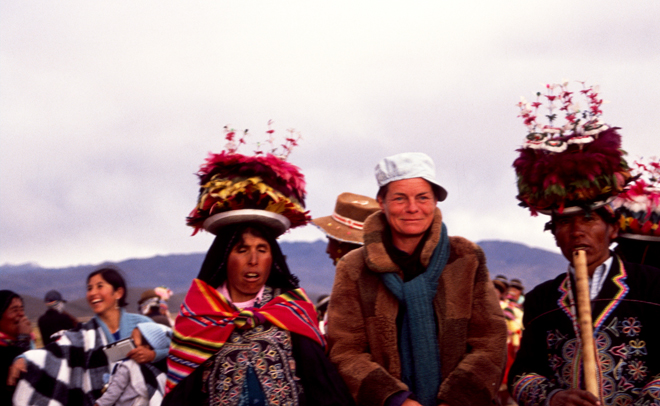 Gezien van de Riet attends a party on the Altiplano

So I went to Bolivia as a sociologist and returned as a painter.