Sometimes it all goes by itself, sometimes it’s hard work. The distribution of light was hard: how to distribute it between the ground, the mountains, the sky? 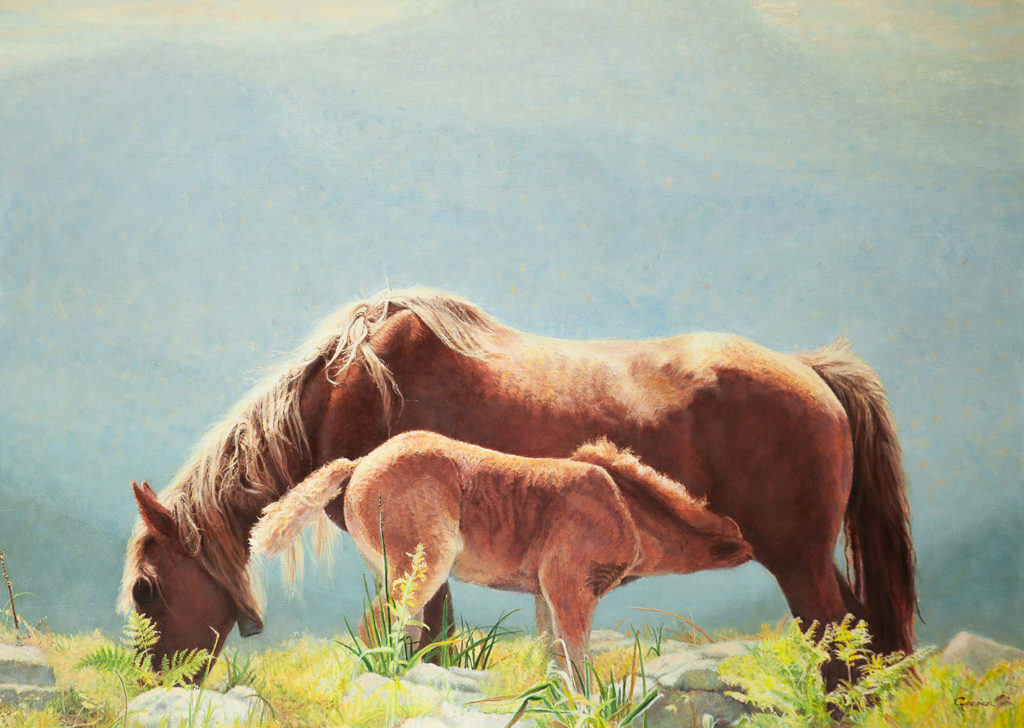 The picture changed continously. The one constant element was the horses. In the end I came back to one of the earliest versions. Now it’s finished.

The quest
Although I did a lot of experimenting in the beginning of my artistic career, I was attracted more and more to realism. In those days realism was rejected by the official art view. Even when the painting touch was very loose. I went one step further, to a sharp-edged realism, true to nature: naturalism. It was doubtful –including for my myself– if that could be considered serious art. Mere copying? I had to think it over. I discovered that the question was already discussed by the old Greeks. This eventually resulted in a lecture. In my blogs I will serve it up in parts. This is part one.

Representation and imagination in naturalistic realism

‘Imitatio et Inventio’ , imitation and invention, are much discussed concepts in art history. I shall try to put them in a new light, based on my own painting practice and art history.
Imitation and invention were indissolubly connected in the classical tradition. Thru time, the content of the imagination and the technique of copying or imitating it assumed different shapes. Also, the relative weight of both elements changed continuously.

In contemporary representational art –or more precisely: naturalistic realism based on classical imagery– the tension between ‘Imitatio’ and ‘Inventio’ is still there.

October 2014 this picture of a work by Gerard Huysman was posted on Facebook’s The Representational Art Group. The first comment was by Joel Mattingly:

I can't understand why an artist would work so hard to make a painting like this that looks so much like a photo. That's what cameras are for. Here I see the skill of the artist, but not the soul.

Don't get me wrong, this artist has mad skills! (…) … realism exists in reality and in photographs, and though I think we all can appreciate the skill in which it takes to make photo realistic art, I find it rather boring to look at.

Apart from the fact that this painting doesn’t belong to photo realism, this comment touches upon a delicate aspect of realistic art. Imitation, naturalistic representation, has assumed such precedence here that is seems to have crowded out the imagination. I would spontaneously agree with Mattingly, if it weren’t for the fact that –different from him– I am struck by the beauty of this painting.

Next time:  the reality is already there and the horse of Alexander the Great.

Bekking&Blitz publish art cards for the big museums in the Netherlands. They have also published a number of cards of my work. In wonderful designs. 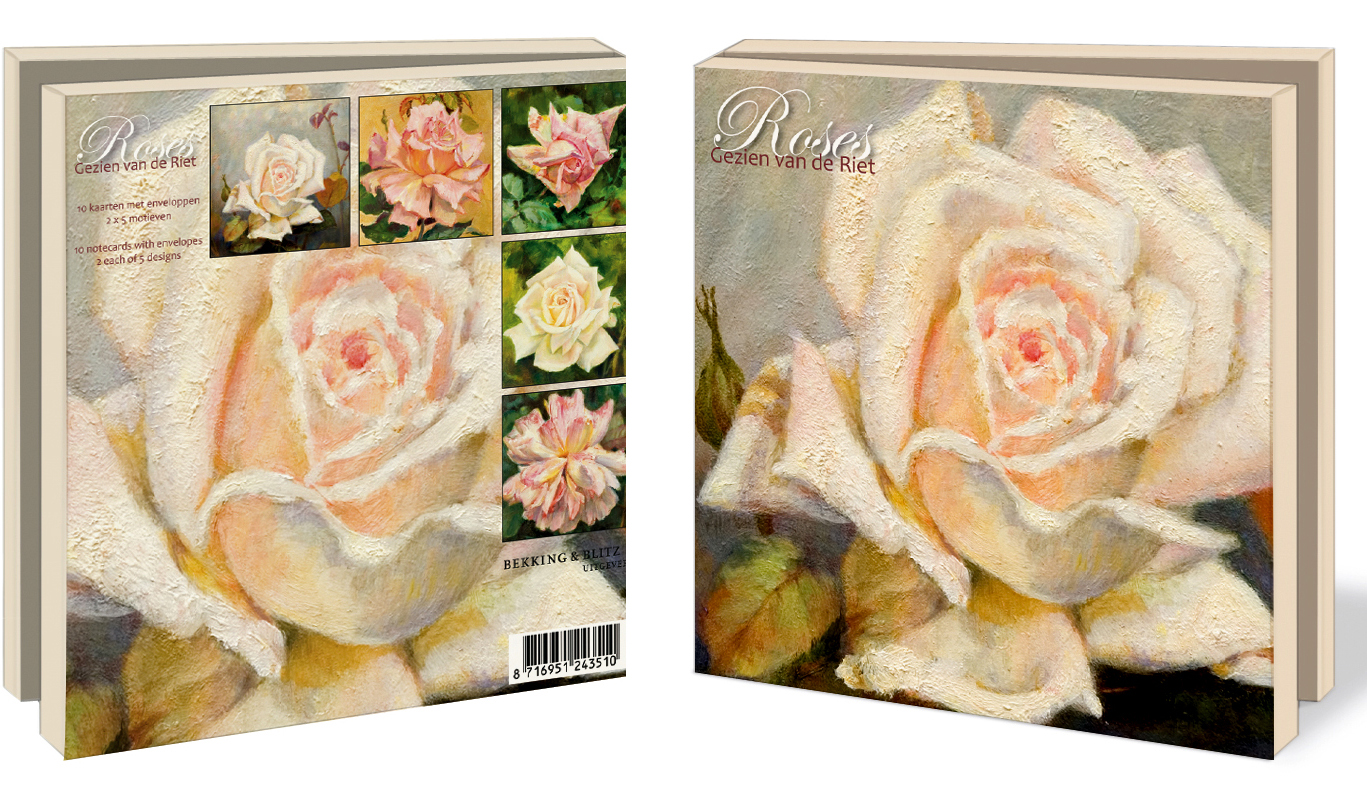 Roses,
a case of 10 double cards with envelopes.
Painting a live rose can be quite exciting. Sometimes, sitting with your field easel near a rose, all of a sudden a leaf unfolds: the rose continues to grow! In my garden each rose has its own character: they unfold in surprising forms, like a triangle for example. 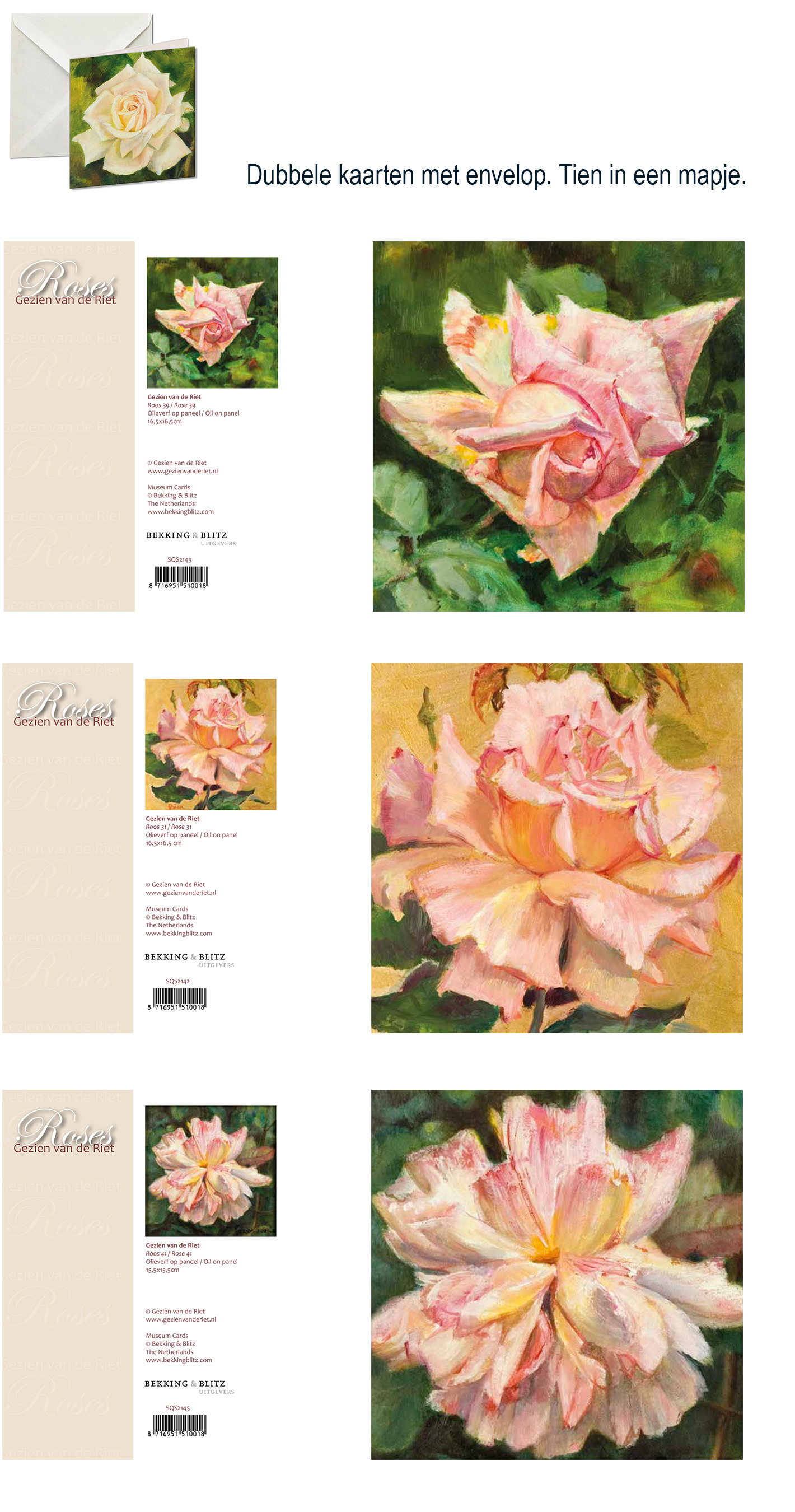 Sitting in front of this rose, this thought came to my mind: the beauty of the rose is the rose itself. If I want to capture that beauty, I will have to paint that rose, with everything on it.
Roses: you can send them to family and friends. A very nice gift!

Museum Cards
Bekking&Blitz also published double cards of my work in its series Museum Cards. That reminds of of earlier times when artists had their paintings copied as engravings, to spread their name and work as much as possible.

Such a card, made from a painting, that covered the long distance from work shop to gallery to publisher to printer to museum shop or book shop to postal worker to door mat, that is of course... nicer than e-mail. In stead of engravings we now have art cards.

Art Agenda & Art Calendar
For 2018 Bekking&Blitz published Art Agendas – also in pocket size - and Art Calendars. They include a pastel of mine. In 2018 I am one of the pantheon of greatest artists of all times... and proud as a peacock! 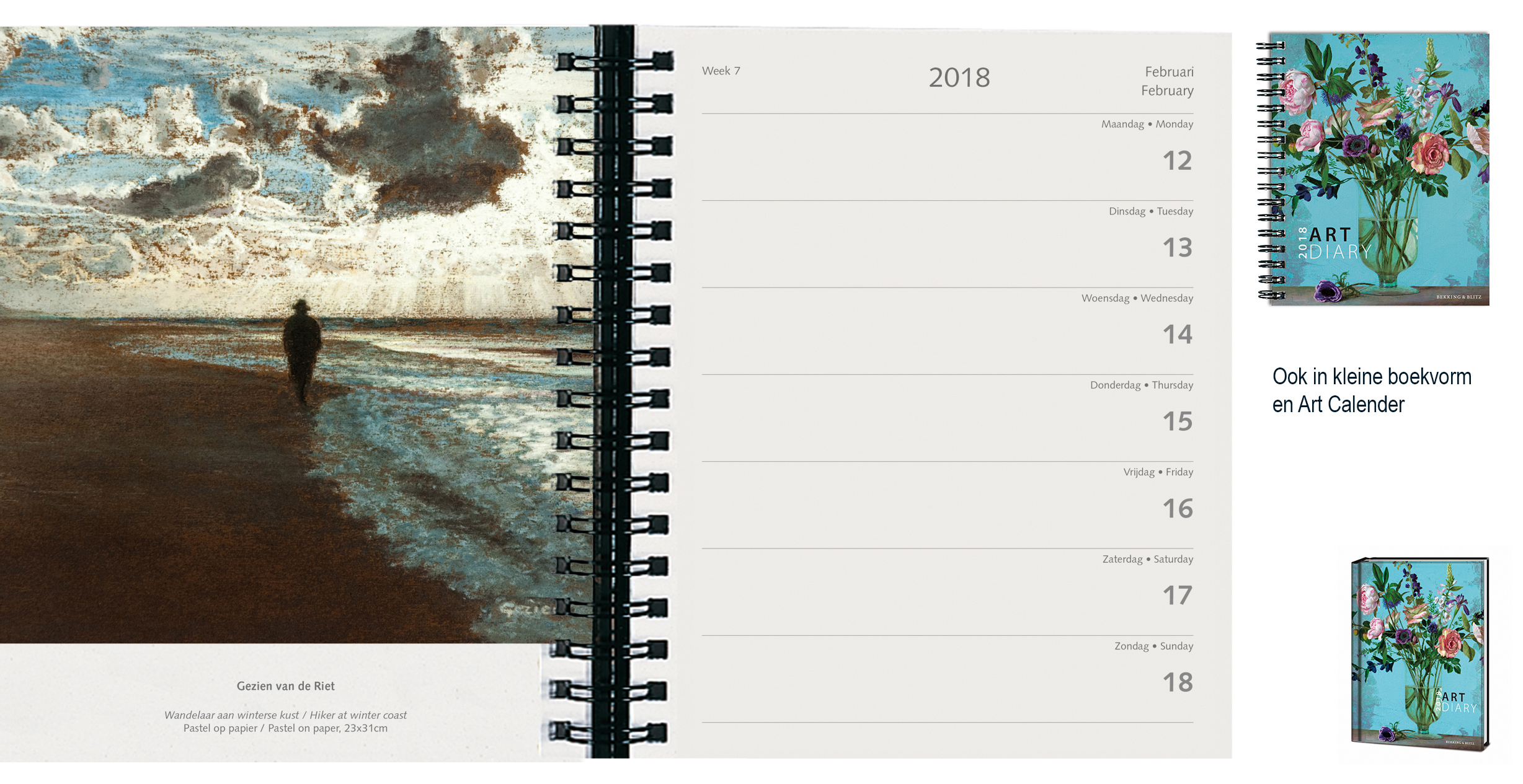 You know how much you support me buying cards, agendas of calendars, or making a present of them, or sending them to some-one…?

It is all for sale in museums and bookshop. 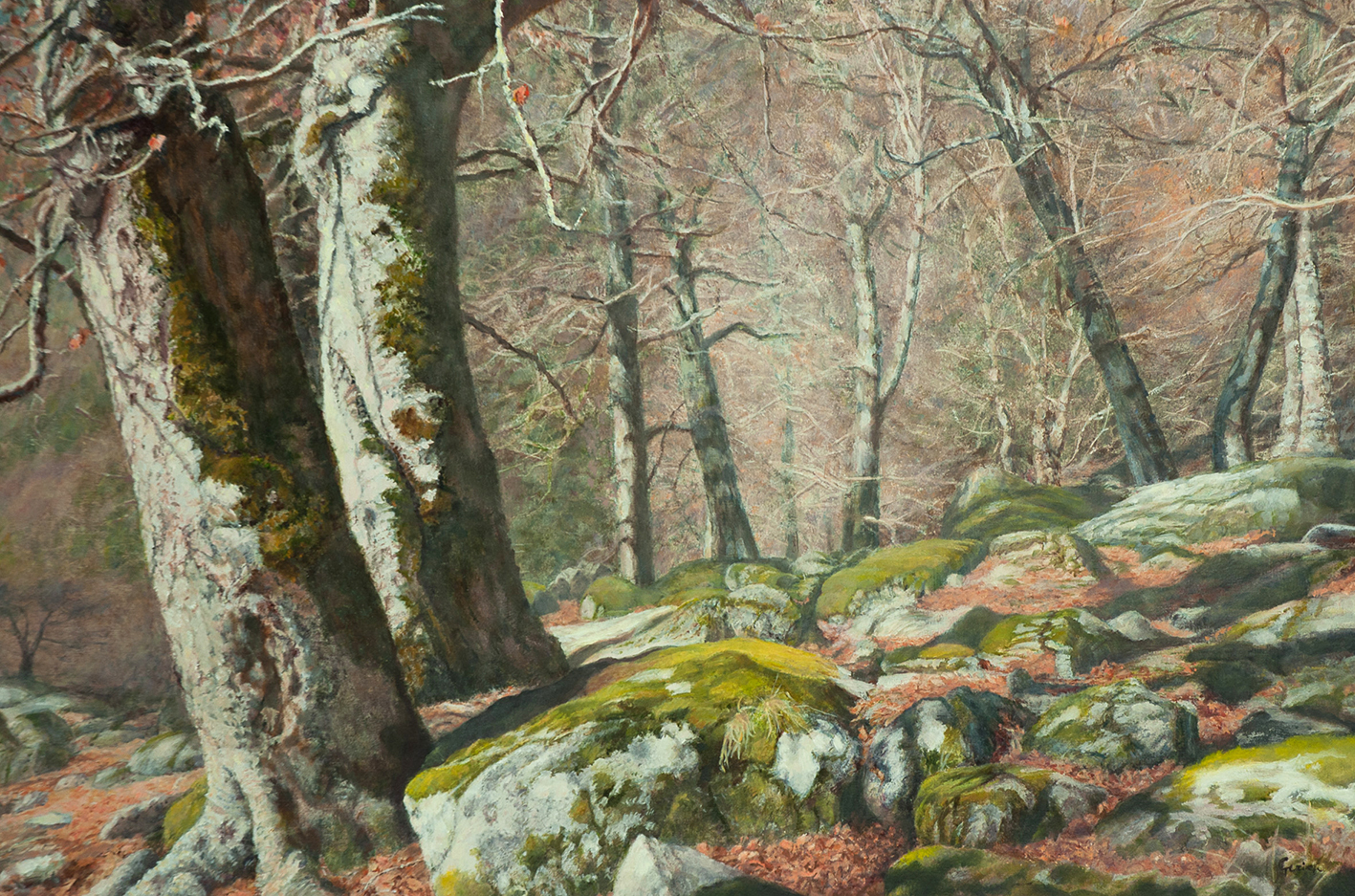 2.400 artists from 98 countries participated, 7 of them were from the Netherlands, and I was one of them. Not quite the finals, but still hurray!

The movement in the US connected to the classical tradition continues! Meeting in Miami, November 2017.
I intend to be there and look forward to it!