In May 2018 I gave a lecture, Imitation and Imagination, at TRAC2018 (The Representational Art Conference) in The Netherlands. The lecture was on naturalistic realism, the area of tension between imitation and imagination. Naturalism has a very high degree of imitation. See for example a comment with regard to a pretty realistic painting, on Facebook (28-10-2014): 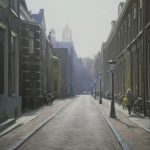 Because really: isn’t imitation getting in the way of imagination? It is a widespread idea: naturalism lacks imagination. But, I will contest that opinion.
Part 1 of the lecture: earlier blog (archive, August 2017)
Part 2 in blog, August 2018
Part 3 is following now (elaborated)

Let us jump to the year 2000. Rembrandt. The Painter at Work is published. It’s a real art treasure from the Dutch Golden Age, expertly and fascinatingly revealed by Ernst van de Wetering. It is nothing less than the forgotten art theories about realism. These had been overlooked for about three centuries. The artists of those days proved to be theoretically very well grounded. This had sharpened their skills and insights. Their world fame was’t for nothing!
This was especially true for Rembrandt, who pondered, investigated and experimented a lot and developed new insights himself. 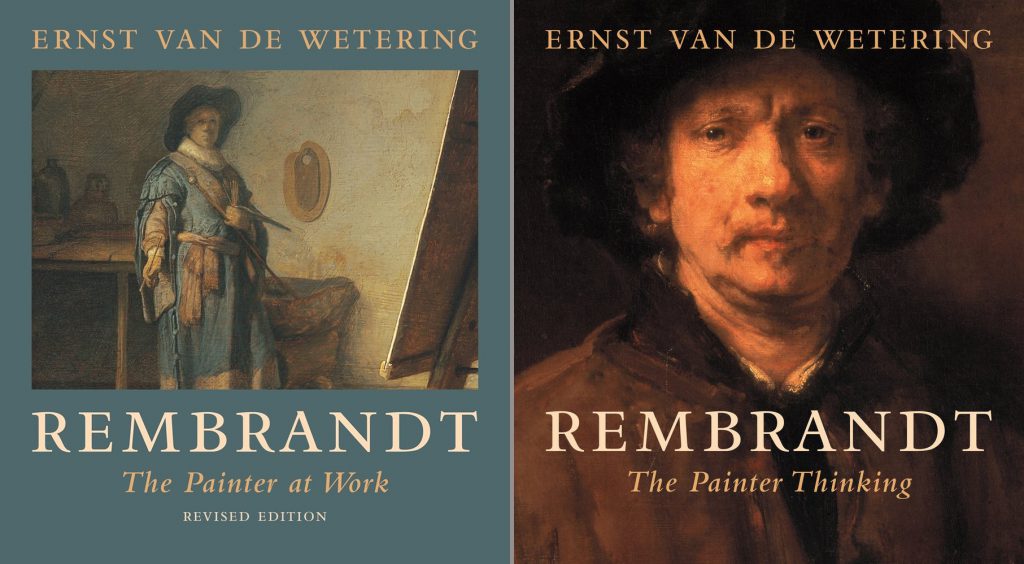 That was an awareness that came to me when I read the book with increasing amazement. How could it be that those ideas weren’t known to us? I wrote to Ernst van de Wetering that I would very much like to learn more about those theories, but didn’t have the time to read the original texts in Old Dutch. I didn’t have to: he sent me more unpublished texts until he published Rembrandt. The Painter Thinking in 2016. Again, I was stunned: what a rich source for the visual arts, so many intelligent ideas in treatises on art theory were brought to light!
Professor Van de Wetering said to me that many people came to tell him that his books were a revelation to them, even if they believed themselves to be well versed in Rembrandt and seventeenth century art. Just like me!
Now let us jump back to that age, the seventeenth century. 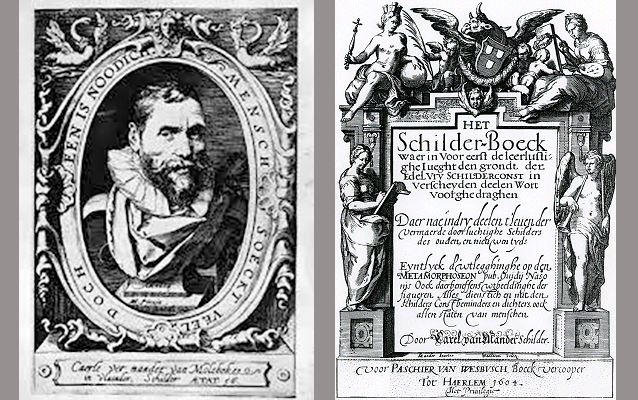 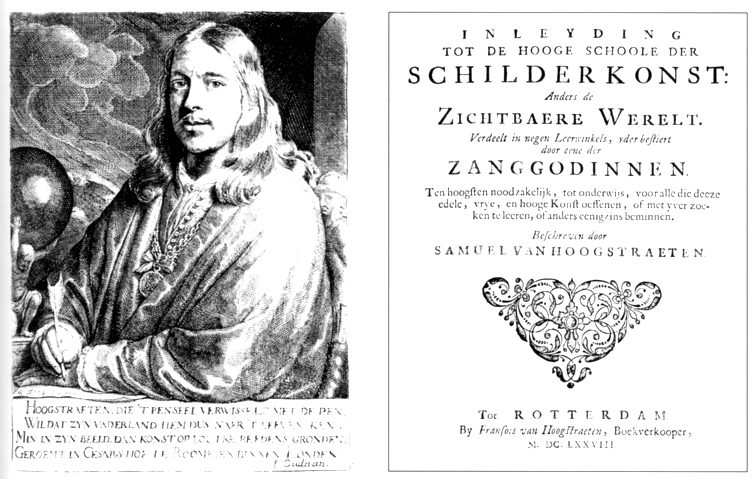 Rembrandt’s former pupil Samuel van Hoogstraeten also wrote an important manual, Inleyding tot de hooge schoole der schilderkonst: anders de zichtbaere werelt. 4) These books belonged to the cultural baggage of every self-respecting painter.
It makes for fascinating reading, certainly also for contemporary realists. It stimulates awareness of many aspects of observation and representation. You can read all about it in Rembrandt. The Painter at Work, and Rembrandt. The Painter Thinking, and other publications by Ernst van de Wetering.

Essential was to create space in order to get the illusion of reality.

Besides perspective, an important element was the ‘perceptibility’. It was found that putting a piece of sky-blue paper against a sky of the same color, you would still notice that the piece of paper is close to you, and the blue sky infinitely distant because of the relative roughness of the paper. The application of the discovery of perceptibility would contribute to three-dimensionality. 5) Imagine painters pondering that! The idea that air has substance, that it forms a body over a short distance, and that its presence should be suggested around every object to create spatiality is wonderful. 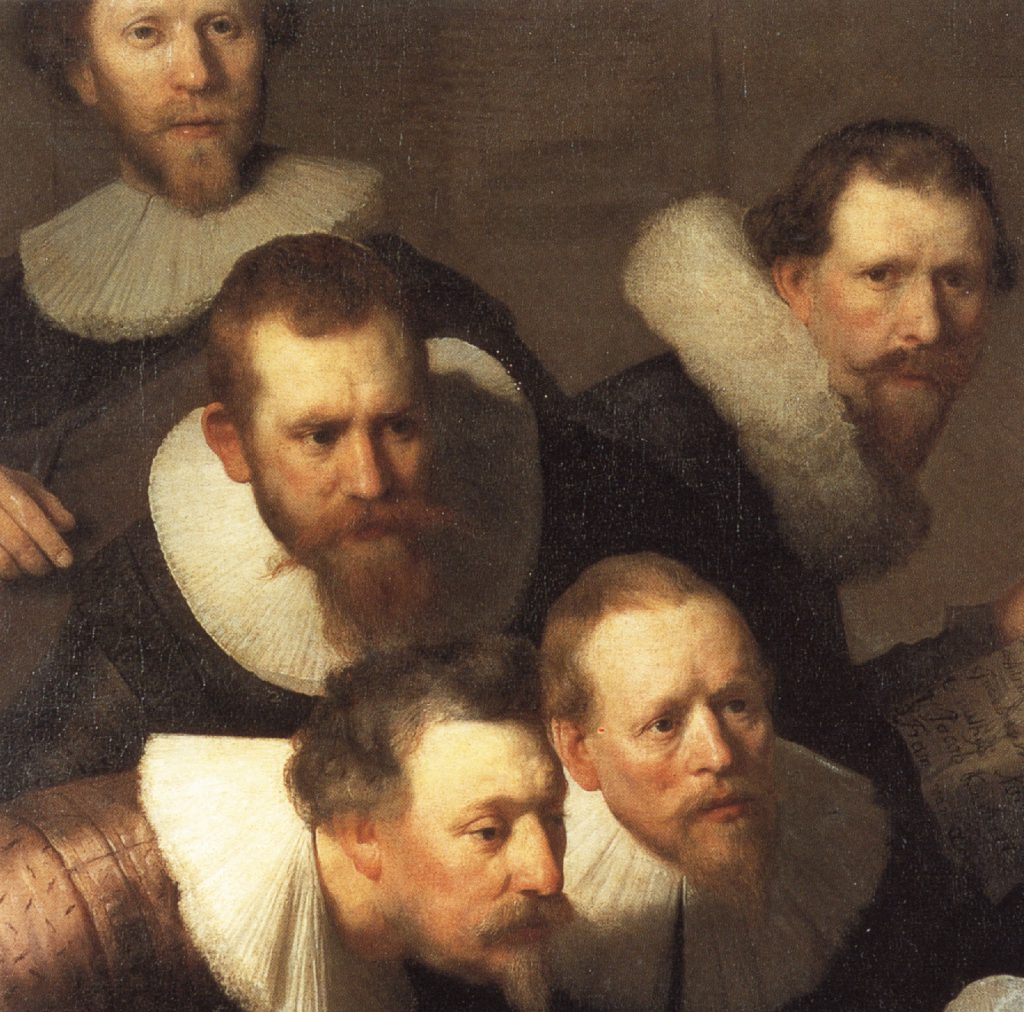 Van de Wetering: “The young Rembrandt had already applied this insight with great subtlety in the ‘Anatomy Lesson of Dr Nicolaes Tulp”. He argues:

“It is only when one consciously takes notice of these extremely refined modulations of light and tone from one head and collar to the other, from front to back, that it becomes clear that this is one of the main reasons for the strikingly atmospheric effect of Rembrandt’s paintings.” 6)

Rembrandt applied this phenomenon quite often, see the details of his Night Watch. You can see it comparing when you compare his Night Watch with similar paintings nearby it, in the Rijksmuseum, Amsterdam.

Vermeer, The Art of Painting

There was also a treatise on the degrees of shadows and what pigments should be used in painting them. Or the theory of the numerical diminution of a light beam falling into a room. 7) Vermeer was probably familiar with it, as is witnessed by the interior light in his paintings. He created a genial combination of spaciousness and intimacy.
These examples show the exceptional level of knowledge among the painters of that age. I don’t mean that we should copy these theories, but we can learn from them, and even improve our art.

Realism, banal, vulgar
Another writer on this period is Boudewijn Bakker. He tells that the extreme realism of the Dutch invited criticism by the Italians: imitation, okay, but what about imagination? After all, art should lift reality to a higher level, creating perfect beauty, idealize. The Dutch subject matter was deemed banal, vulgar. 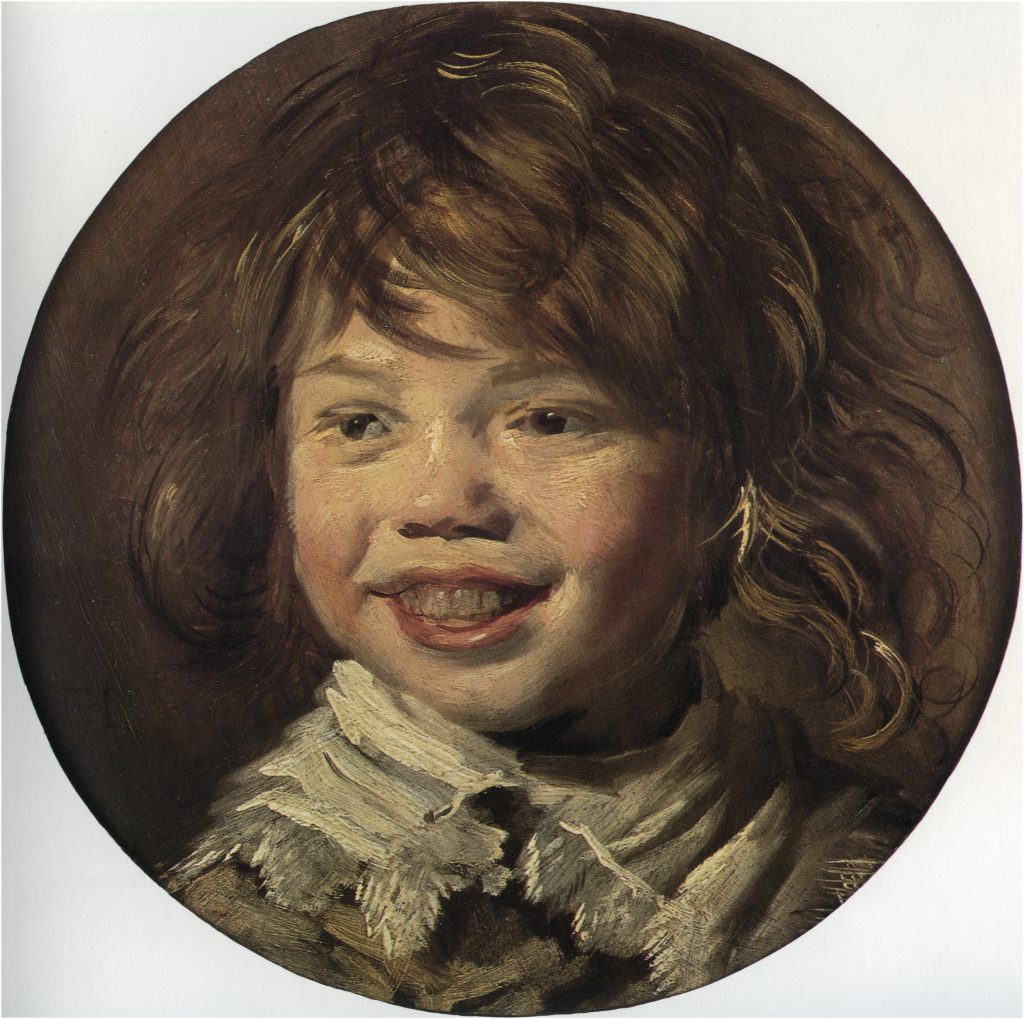 How this Dutch realism was seen even in the 18th century is shown in this caricature by the English artist Thomas Rowlandson: A Dutch Academy. 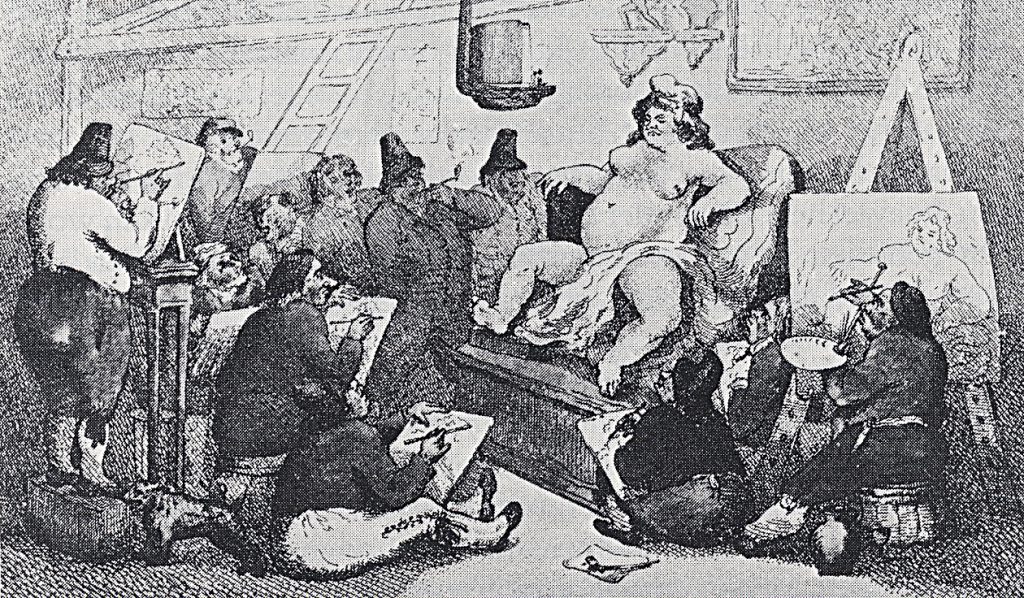 Classical art theory taught that students should draw after antique statues, since these had perfect proportions. Samuel Van Hoogstraten, who later turned to a more classicist style, complained that Rembrandt brought ugly models into his studio.

“Indeed, I bemoan my lot when I look over my old Academy drawings, that we were taught these so sparingly in our youth; since it is no more labor to imitate a graceful posture than an unpleasant and disgusting one.” 8)

Rembrandt really went far… In one of his self-portraits I detected a pimple on his left cheek. He must have had fun painting that ‘truth’. 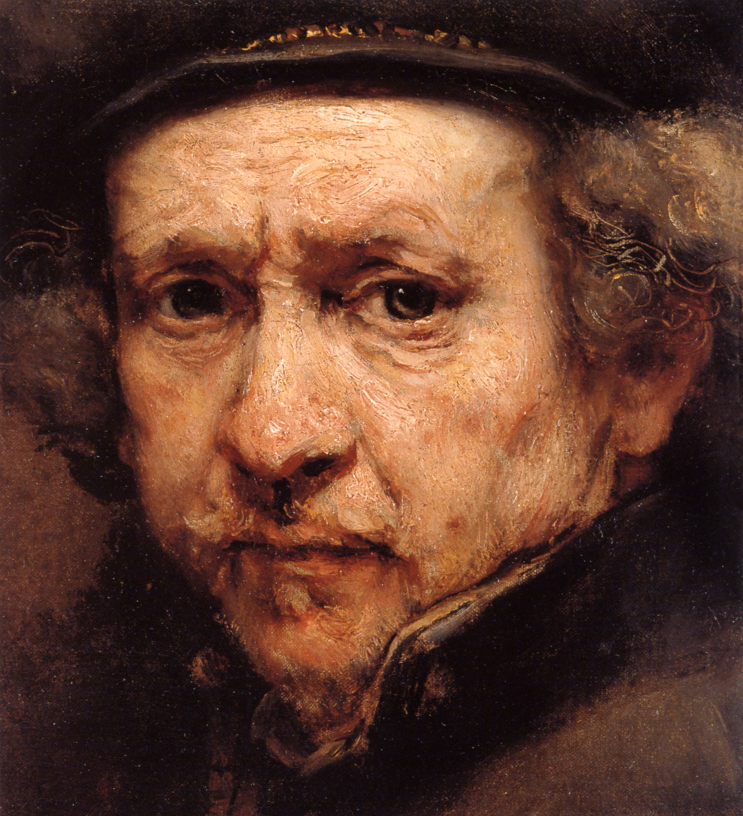 I told this to my dear teacher Diederik Kraaijpoel. ‘Without style there is no art’, he had written in one of his books; that makes sense: reality itself has no style. So, such a pimple, such far-reaching realism, I asked, isn’t that going beyond style? Well, he could not believe that Rembrandt had actually painted a pimple on his cheek… And about this far-reaching naturalism he said: it’s never a copy, the artist always makes a selection, it is impossible to paint all.

Answer: a ‘find’
Karel van Mander answered the Italian criticism by stating: “In life one finds all”, there is no better textbook. In the ‘book of nature’ the visible creation is seen as the second or even first ‘book’ of divine revelation, next to the Holy Scriptures. 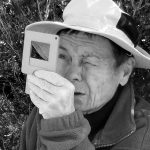 Inventio, Imagination, can also be seen as ‘a find ‘, something that is found in nature after long and sharp observation. Intensive looking is the entrance key to beauty. Beauty is enclosed in reality. Reality is created by God. 9)

As soon as possible the painter should start to work after nature. And what about style, maniera? His advice: don’t make things up, “go from ornamentation towards truth!”. Fabrications could affect the illusion of reality. The painter should not stylize or idealize, but characterize. 10)

For Rembrandt, ‘truth’ was life, to be captured in its ‘most natural liveliness’. 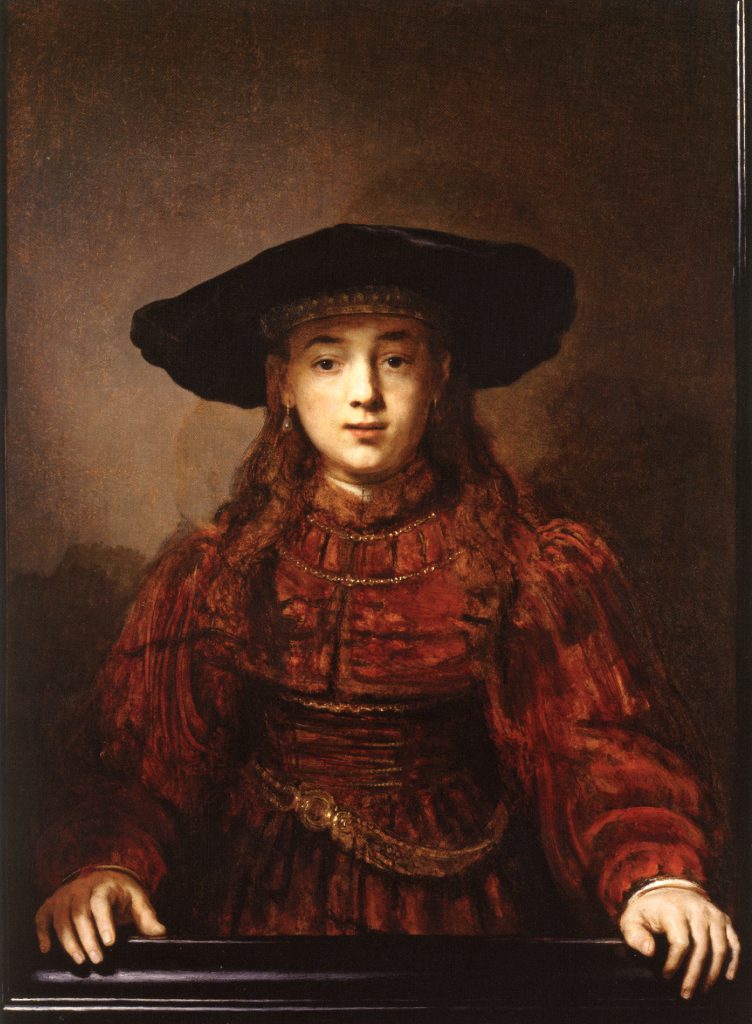 Rembrandt, Girl in a Pictureframe

Van de Wetering remarks that the painting Young woman in a picture frame gives the impression that the young woman is about to place her right hand on the frame, even the earring seems to be moving, life is caught in the act.11)

Well, the Dutch diverged from current art theory. Imitation was highly appreciated. But invention or imagination was never far away. Beauty in truth, intensely observed by the artist, was transferred into the work of art.
For me, it was like homecoming. I had always felt that way.